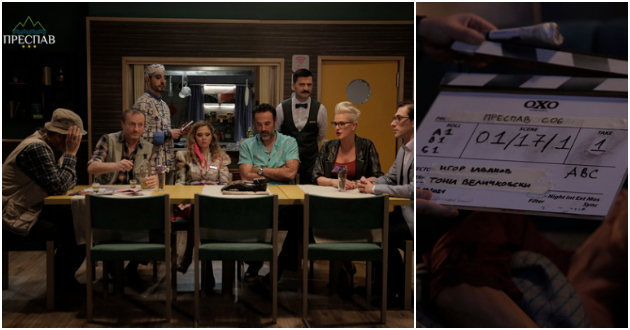 Production begins on the latest season of “Prespav”, the most successful, longest-running series with the largest fan base in North Macedonia.

The wildly popular show’s sixth season will consist of 20 new episodes, co-produced by OXO and MRTV, whose representatives hint of numerous surprises and lots of humor.

The season 5 finale signed off with a fire at the boarding house, which led fans into thinking that it’s ‘the end of Prespav’.

But, the production company reassures fans that the series is at its peak, with the writing room ready to make audiences laugh again, inspired by the turbulent social realism mirrored in everyday situations at the boarding house.

“Going through pandemic labyrinths and tackling an enormous challenge, we successfully produced season 5 in spite of everything, and this motivated us to continue moving forward. By this wind in our backs, we will produce season 6 with the best episode scripts to date, relying on the international team of screenwriters, and every crew member and every individual included in the production of Prespav”, says the producer Pece Taleski.

As a TV product, Prespav is slowly developing into a communications platform and a production brand worthy of representing the country internationally.

After securing air time on the Bulgarian TV station bTV Comedy (a bTV Network affiliate), where it gained enormous success and viewership share, a few episodes of the series were shown in the Republic of Serbia as well, as part of the programs of a couple of film and TV festivals, which lays out the workings for seeing the series on Serbian TV channels too.

Follow Prespav on social media for all related news and be on the lookout for a TV premiere of season 6 somewhere in the middle of December.