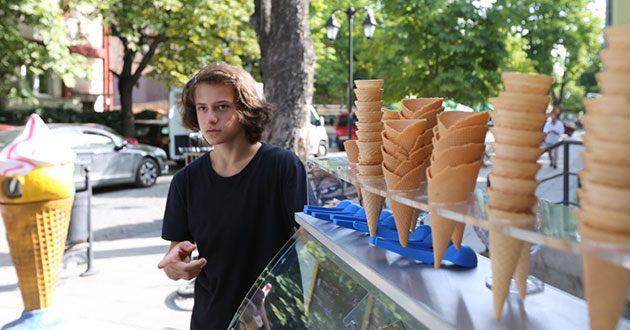 This morning production wrapped on “A Ton Of Ice Cream” – new short directed by Sandra Gjorgieva, filmed on several locations throughout Skopje, as stated in a press release by OXO Production.

The film will have its first presentation to the public as an ongoing project at the Sarajevo Film festival (13-20 August 2021), as part of the “Pack And Pitch” program, where young film creatives – dubbed “Sarajevo Talents”, will have the opportunity to present and talk about their projects.

The main cast of “A Ton Of Ice Cream” is made of Jelena Jovanova-Perikj, Bodan Kirandziski and Jovana Ivanova. The story follows the agony and psychological workings of Vedran (Kirandziski), who struggles with himself as a consequence of a dreadful event in his life.

“He tries to fix things, but instead becomes obsessed with his own absurd behavior towards Eva (Jovanova-Perikj) and her daughter (Ivanova), looking for forgiveness from them, instead of from himself.” – the press release said.

The director Gjorgieva also co-authors the script for the film, together with Jakov Popovski, and the film’s DOP is Gjorgji Klincharov.

Following the success of her debut short “Black And White” – which, incidentally, is the first Macedonian film musical – Gjorgieva is once again supported by the Film Agency of North Macedonia.